Cycling Eurasia is the theme of Stephan – a bikepacker from Germany I met when I was on the way from Borobudur temple to Jogja. At that time I was still riding my bike when I saw a bikepacker riding his bike full of luggage in front of me. I greeted him without thinking that he was a foreigner. He in fact is from Germany and has been travelling by bike around some countries such as China, Thailand. Before arriving in Java island, he spent some weeks to explore along the coast of Sumatra island. Since he was heading for Jogja, I offered him to bike together with me and Nana, my biking mate. The first place we visited together was Mendut temple.
In Mendut, Stephan seemed to enjoy the exotic temple that was still full of visitors – both from Indonesia and abroad. Stephan was excited to see those foreign tourists since he said that he saw only one foreigner during his journey along Sumatra for weeks. In Sumatra he also hardly saw cyclists while in Java island he often found villagers riding bicycles in villages he passed by.

From Mendut temple, Stephan said he planned to search Ngawen temple he saw in his map. Nana and I agreed to accompany him to find it. Ngawen temple is located around 6 kilometers from Borobudur and to find it, we had to ask some people we met on the way because we didn’t find any sign to go there.

We spent around 20 minutes in Ngawen, then we continued our journey to Jogja. A friend gave me an address of Pak Jo, someone whose house was made as a homebase for bikepackers around Indonesia. Unfortunately when we arrived there, Pak Jo was not at home. This time we could no longer accompany Stephan because we had to continue our journey to Solo. We had to leave Stephan around Malioboro.

I thought it would be the last minute to spend with Stephan. In fact I was wrong.

**********
Two days later, Stephan called me to tell me that he would come the following morning and stay a night in Solo. I was happy to hear that because I thought there were some similarities between us: we both like cycling; during our journey, we both like any cultural events we find, nd we both also like tourist places in any city we visit: bikepacking is not just a matter of biking long journey without enjoying other things but biking itself. “There are many interesting places in Indonesia,” he said. I remember when we were at Mendut, Stephan asked me some questions about a parade he saw in Kutoarjo – one small town he passed from Jakarta to Magelang. At that time he asked someone about the parade and that person wrote in his small notebook, “khotmil quran”, “Isra’ mi’raj”. He then would ask someone else who can explain what those words mean.
As a bikepacker who has travelled more than 17.000 kilometers, Stephan is a modest one: his bike is not ‘heavily’ upgraded, it is just a ‘standard’ one. no accessories in it. Stephan even ‘only’ wears sandals, not those shoes/sneakers made especially for cyclists. He just wears simple helmet, without gloves, buffs, or any other accessories/equipment.
When he arrived in Solo, I let him stay a night in my house. He seemed interested in some household equipment made of bamboos; he was also attracted at the pictures of my sister’s wedding party since in the pictures, my sister and her husband were wearing costumes that made them look like a king and a queen. The fact that there are 11 people of Ranz’s (extended) living together in 2 houses attched to each other was also interesting for Stephan to know.
That night, after having dinner together (he ate 3 portions of fried rice! wow! LOL), Stephan told me that he wanted to go climbing Merapi mountain, but due to the changeable weather, he had to cancel that plan. Then we talked about the route he would take the following day. He would continue to East Java but he had to choose whether he would take the route in the middle (Ngawi and so on) or to the South (Sukoharjo – Wonogiri – Pacitan and so on). In fact I suggested him to visit Trowulan archeological sites. However, he chose to take the South route. FYI, he wanted to go to Malang and climb Bromo mountain. He also told me that he wanted to stay longer in Indonesia since, “There are many interesting places to visit here,” he said. J
The following morning, I accompanied him to go to a bookstore; he wanted to buy a map of Lombok island. Unfortunately we didn’t find one. Then I took him to Kraton Surakarta (the king’s palace. Arriving there, we were warmly welcome by the ‘abdi dalem’ (‘helpers’ of the king of Surakarta). They almost didn’t believe to see Stephan’s fully-loaded bike and his story that he arrived in Indonesia by bike all the way from Germany. They even gave us a special place to park our bikes. J Another nice thing was Stephan could ‘just’ buy a ticket for local people (not for foreign tourists).


From Kraton, I accompanied him biking to Sukoharjo, one small town, already out of Solo’s city. I gave him a phone number of a friend of mine living in East Java in case he needs a guide on his way to Bromo mountain.


Meeting Stephan – who has travelled more than 19000 kilometers along his journey around Europe and Asia – reminded me that biking long distance is a luxury to spoil ourselves, to enjoy the beauty of the world with its various rich different cultures. It is a big dream for me to travel abroad by bike; however it means nothing if we even do not know the beauty of our own country: by visiting those places by bike of course!.

Let us pedal our bike while enjoying the beauty of our world.

translated into English by Nana Podungge From Ananda Ranz' post. 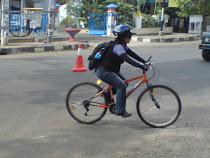 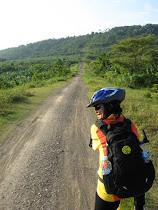 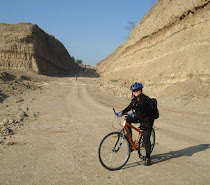 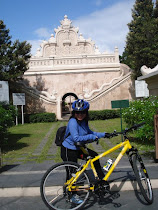 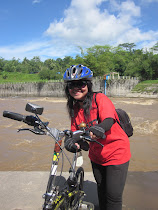 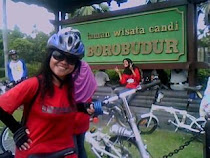